The Journey Of Antibody: From The Magic Bullet To Bedside Drug No Comments on The Journey Of Antibody: From The Magic Bullet To Bedside Drug Monoclonal Antibodies

The Journey Of Antibody: From The Magic Bullet To Bedside Drug

All through three-generation, we have witnessed the wonderful use of Monoclonal antibody production in the way it helps in our diagnosis and therapy. Immunotherapy with a targeted molecule like Antibody has gained a lot of attention in cancer treatment due to its efficacy and specificity. In Cancer, these monoclonal antibodies primarily target specific antigens living on cancer cells’ surface regions and treat cancer by destroying the cancer cells. 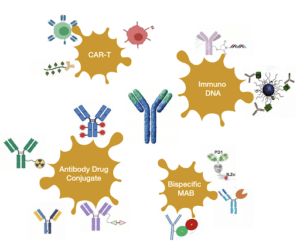 The T cells will destroy the cancerous cells, but the PD-1 will rein inside the T cells and destroy healthy cells. But, some cancer cells will wear PD-L1 protein. It will fool T cells to treat them like normal cells so that they can multiply. But, that’s when naked monoclonal antibodies come into action. They will block checkpoint molecules, which will force Y cells to move out and destroy cancerous cells.

Some monoclonal antibodies will carry a radioactive drug, toxin, or substance to kill the cancerous cells. These options are called conjugated humanised monoclonal antibodies. Here, the antibody-drug will conjugate, and the antibodies with chemo drugs will get attached to their bodies. Then, together they will target the cancerous cells to deliver the toxic substance to that specified zone. It might eliminate some chemotherapy side effects.

As understood from the name, Bispecific monoclonal antibodies are made using two different mAbs. So, there are two other proteins attached at the same time. One such example is Blincyto, used for treating leukemia.  One portion of the Blincyto will get attached to the CD19 protein, as found in some lymphoma cells. Then another part is associated with CD3, which is a protein found in T cells. By binding these proteins, the drugs will bring together cancer and immune cells. It results in immune systems attacking the cancerous cells.

GENEXT GENOMICS does the early discovery of the Antibody-based molecule against various targets with its hyperimmune library of Solid Cancer Targets. The Diverse Library against all the type of cancer ensures the successful delivery of binders and neutralizing Antibody. 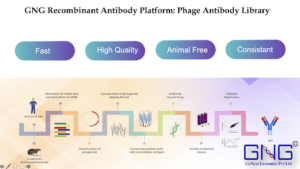 Visit www.genextgenomics.com and write to us at info@genextgenomics.com for further insight into antibody-drug discovery for Human and Animal health. Talk to our expert team for current assays and lead development programs and be a part of giving value to the global health sector.